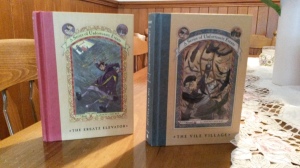 I never finished A Series Of Unfortunate Events as a child so every now and then (like when I finish my book or the tablet I was reading on dies) I will pick the next one or two off my boyfriend’s shelf and slowly continue to work my way through the series. Yesterday it was The Ersatz Elevator and The Vile Village that accompanied me on my train ride home.

The end of book five, The Austere Academy, gave this series a well needed change up. The Baudelaires new friends, the Quagmire triplets, have discovered an important secret about V.F.D and the Baudelaire parents, but they have been kidnapped by the evil Count Olaf. So not only do the Baudelaire siblings have to worry about what guardian they’re going to end up with next, they also are worrying about the fate of their friends. Needless to say, they have a lot on their plates.

The Ersatz Elevator introduces the Baudelaires to their next guardians, the Squalors, who live in a penthouse apartment with seventy-one rooms in their old neighbourhood. Esme Squalor thinks very highly of things that are ‘in’ and ‘out’ – right now orphans are in and elevators are out, so the orphans must walk up either forty-eight or eighty-four stories (the doorman wasn’t sure which one) to get to their new home. While dealing with what’s ‘in’ and what’s ‘out’, the Baudelaires are keeping an eye out for Count Olaf and trying to work out where the Quagmire triplets are and what V.F.D stands for.

Once again, the Baudelaires know that the adults whose care they are in are useless at protecting them against Count Olaf and it seems like they are the only ones looking for the Quagmire triplets. I like the extra layer that the Quagmire triplets (even though there are only two of them) have brought to the story and the mystery of the V.F.D is intriguing. These books, while still following a general formula of the Baudelaire siblings being placed with new guardians and Count Olaf trying to get his hands on their fortune, have had that changed up with the addition of the triplets and the V.F.D. I’m trying to avoid spoilers but I really want to know what the V.F.D is! It’s a little frustrating to feel so close to answers and then they’re out of reach, but it’s still interesting enough to keep me reading.

Still enjoying them, even more than before!

Tell me what you think! Cancel reply