Enjoying an Aussie author over an Aussie breakfast

This Shattered World is everything I wanted These Broken Stars to be – and more. In the places that These Broken Stars didn’t deliver enough for me, This Shattered World far exceeded any expectations. One of those super big positives was that This Shattered World is not about Lilac and Tarver, though I was curious to know what had happened to them, I couldn’t deal with Lilac’s voice again. In This Shattered World we are on the planet Avon where we meet Captain Jubilee Chase, an absolute badass soldier leading her men to maintain the peace on Avon, which is far behind the other planets in terraforming and is also home to The Fury, which sends people crazy. When she crosses paths with Flynn Cormac, the leader of the peaceful rebellion known as the Fianna, he kidnaps her to find out about a secret facility that seems to have appeared overnight. Neither of them could have known what this would lead to, but it is just the beginning of a sequence of events that’s about to change the world they live on.

END_OF_DOCUMENT_TOKEN_TO_BE_REPLACED

A Thousand Pieces of You took me longer to read than expected, but it’s not the book’s fault – in a mad dash for a train the book and I were separated and it landed ungracefully in the carpark. Luckily my boyfriend, who had dropped me off, was able to go back and rescue it, but as a result the book and I were separated for a few days. Though I was a bit iffy about it I was glad to be reunited.

END_OF_DOCUMENT_TOKEN_TO_BE_REPLACED 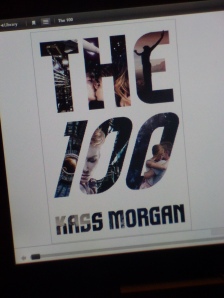 END_OF_DOCUMENT_TOKEN_TO_BE_REPLACED

Author: Leonardo Patrignani
Series: Multiversum, #1
Publisher: Scribe
Star Rating: 3.5/5
Date Read: July 7th to 9th, 2014
Read Count: 1
Review:
Thank you to Goodreads and the publishers for sending me this book in exchange for honest review. This did not alter my review in any way.

Multiversum is the exciting, fast-paced story of teenagers Alex and Jenny, who live on opposite sides of the world and share a telepathic communication which has grown stronger over time. But when, after four years, they finally manage to arrange a meeting, they find that they exist in different dimensions, parallel universes. As Earth’s end looms closer and all existences threaten to cease, the two of them need to work out how to control their gifts and save themselves. When it seems like everything and everyone is working against them, except for Alex’s brilliant friend Marco, they have only each other – and the future of Earth is at stake.

END_OF_DOCUMENT_TOKEN_TO_BE_REPLACED

Author: Pittacus Lore
Series: Lorien Legacies: The Lost Files #1 – 3
Publisher: Penguin
Star Rating: 3/5
Date Read: September 18th to 19th, 2013
Read Count: 1
Review:
It was so refreshing to read Lorien stories that weren’t from John’s perspective at all! I did enjoy reading these stories as I’m so intrigued by Loric-Mogadorian fight and I felt this was a fitting companion to expand on the individual stories of the rest of the Garde, other than what we have gained from the series itself. Note that this book, though set before the main series, is best read after reading the previous books (#1 – #3) that were published before this one, mainly as the author doesn’t explain anything about the Garde, the Loric or their fight with the ‘Mogs’, which I was glad of.

What I was not glad about was “Pittacus Lore” (we all know it’s you, James Frey!) and his ridiculous attempts to add romance/love stories/possible love stories/even just crushes to every single backstory (or current – but that’s another review!). It. Is. Just. Not. Necessary. I understand the lure of human relationships, even friendships or connections, but guys, c’mon. YOU ARE IN MORTAL DANGER. I can maybe understand One, she had no idea just how much danger she was in. But Nine? Really? Guys how about the protection of our races? Clearly both humans and the Loric are in trouble, why don’t you do what you were sent here for and keep yourselves alive? Don’t argue that you’re only human – because you’re not. You are supposed to be more than that! Pull your heads in!

That being said, Adam the Mog was quite an interesting character. A bit of a speed through of the find and murder of Two and Three, but interesting to see it through the eyes of a character not yet encountered this way. Looking forward to seeing more of that! (And less of John…)

Author: Pittacus Lore
Series: Lorien Legacies, Book 4
Publisher: Penguin
Star Rating: 3/5
Date Read: September 18th to 29th, 2013
Read Count: 1
Review:
So we re-enter the hectic world that is the Loric’s fight to save humanity from the Mogadorians. The remaining Loric are reunited with the exception of Five, who they are trying desperately to find.

I have made no secret of the fact that I can’t stand Number Four/John Smith. The good thing about the alternate perspectives is I don’t have to read a whole book of Four’s blathering about how much he loves Sarah but oh no he kissed Six and he thinks he’s a reincarnation of Pittacus Lore and blah blah blah. Seven/Marina is the voice of reason and I enjoy her view. Sam, as one of the only humans in the groups, also provides a different insight which I did think was interesting but he also had a lot of rubbish in his head too.

Nevertheless, I did enjoy this latest installment and JUST QUICKLY I never thought that these books would be able to surprise me but they did! And now I’m looking forward to the next one way more than I thought I would! But also I should mention that I left this book at work and didn’t pick it up for a week, read about three other books in between and didn’t really miss it so that’s why this is only getting three stars.

Lilac LaRoux is the daughter of the richest man in the galaxy. Tarver Merendsen is a decorated soldier who has risen up through the ranks to become a war hero. They never should have crossed paths. Not under ordinary circumstances.

But when the spaceliner they are both traveling on is torn from hyperspace and crash lands on the nearest planet, social convention changes. Tarver saves Lilac from plummeting over a railing while the Icarus is beginning to fall, and the two of them get to an escape pod that’s supposed to disconnect from the ship. When it doesn’t, snotty Lilac shows she is actually good for something and is able to effectively hotwire the escape pod and they are able to launch off the ship. They are the only ones who do.

Tarver and Lilac need to learn to trust each other and work together while they wait to be rescued. Tarver really is a hero – he is strong, smart and works hard. Lilac is pretty useless unless it comes to electronics – otherwise all she does is complain and try to walk across rugged terrain in her high heels. She is frustrating to read about at first, and I couldn’t stand her voice. However, her character development along the course of the story makes her more likeable. Her selfless acts, thinking only of Tarver, proved how far she had come. But her death, while I now understand was necessary in order to understand exactly what had happened on that planet, I thought in that setting could have been avoidable. Had she taken a little more care, a little more time, such an accident wouldn’t have happened. But I told you she wasn’t particularly smart.

The authors pick you up and dump you into the not so distant future, where other planets have been colonised and space travel is common. There isn’t a lot of information about this world offered straight up, but we are led to understand more and more as the novel progresses. We are given glimpses of war and the division of class, but I need more information. I still have a lot of questions. Hopefully they will be answered further into the trilogy. I’m intrigued by this world and by Tarver, and what has happened to Lilac (How does that work? She has two bodies now?). I want to know more and will be looking forward to the next installment in the trilogy.